Using a pushbutton that completes the circuit only while being pressed can turn an LED on while the button is being held down. But what if you wanted to press it once and have the LED light up and then press it again and turn off the LED? Well you can do this. It is done with an Arduino using State Change Detection (also known as edge detection). This tutorial will teach you how to do it and you will see the Arduino send a message to the Serial Monitor with that information and it will display the count of the state changes that turn on and off the LED. This can also be adapted to use with a relay to turn on and off an appliance such as a stereo amplifier, fan, or floor lamp. And with even further development  you can do this using an infrared remote control. So let’s learn more!

To make this project you will need:

And here is how you wire it up.

When the pushbutton is open (unpressed) there is no connection between the two legs of the pushbutton, so the pin is connected to ground (through the pull-down resistor) and we read a LOW. When the button is closed (pressed), it makes a connection between its two legs, connecting the pin to voltage, so that we read a HIGH. (The pin is still connected to ground, but the resistor resists the flow of current, so the path of least resistance is to +5V.)

If you disconnect the digital I/O pin from everything, the LED may blink erratically. This is because the input is “floating” – that is, not connected to either voltage or ground. It will more or less randomly return either HIGH or LOW. That’s why you need a pull-down resistor in the circuit.

This example shows how to detect when a button or button changes from off to on and on to off.

This example code is in the public domain. 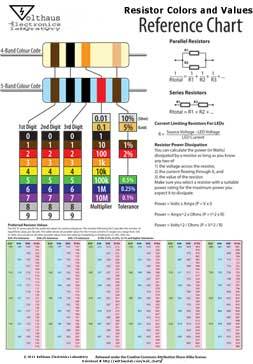 We've posted a very quick and easy way to find out what resistor works with your LEDs. Single LED or multiple LEDs in series or parallel configurations. Click Here

Books For the Electronic Hobbyist

Click here to visit our profile page on Instructables, which is a great source of all kinds of projects.

Follow the lab on Twitter
We use fresh baked e-cookies to ensure that we give you the best experience on our website. They expire in one day. If you continue to use this site we will assume that you are cool with it.Ok